It's warm again! Hurrah! As I remind my boyfriend when he teases me for always being cold, I spent the first eighteen years of my life exclusively in a tropical climate. So the return of sunshine to campus is much, much appreciated. This weekend was cheery and sunny (except for the latter end of yesterday, during which I began referring to said boyfriend as "Noah"), so I wanted to wear something with a soft, cheery palette. Here's what I came up with. 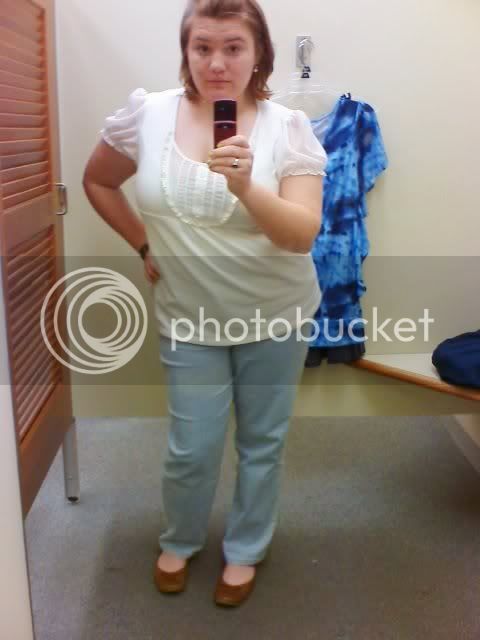 I swear I don't actually have feet that turn inwwards... I turn my feet like that when I'm trying to be cute. I have no idea why.


I thought this was pretty awesome... these tops are almost identical to the one I was wearing at Kohls (and in these shots). Except mine was $3.

I just don't know how people afford so much money on clothes. I'm not saying there's anything wrong with it, but as much as I love clothes, I have a hard time justifying that much money on one item. Maybe it's a symptom of having a thrifting gene, I don't know.

For example, found this top that I LOVE LOVE LOVE at Kohls... but it's $25 on sale. So unless it magically drops to the $10 region, I'll be passing.

I've been seeing a lot of floral appliques on... well, everything, lately. I wandered into Charlotte Russe yesterday, despite the fact that nothing from there will probably ever fit me. But I'm a big proponent of TRY TRY TRY! so there I went. I didn't find anything that particularly appealed to me, but I did see a lot of the floral appliques I mentioned.


Here are a few screencaps from CR's website, with links through if anyone's interested in teensy clothes. ;D

Anyway, the point is that I spent some time pulling, prodding, and peeking at these... and I think with some ribbon, netting, and a bit of patience, I can add some similar detailing to some otherwise boring tops just sitting around in my room. I'll let you know how it goes.
Email ThisBlogThis!Share to TwitterShare to FacebookShare to Pinterest
Posted by Lauren B at 9:03 AM