I've been really frustrated with myself lately. I think because I'm not doing exactly what I want. Don't get me wrong, I love my job; it's challenging, quick-paced, and ever-changing. But it's not writing. I have this need to write that's been a part of me for as long as I can remember. I love storytelling. It's what I do.

More on that later.

This Thursday was my office's Christmas party, and my roomski, the boyfriend, and I were all planning on attending. However, we got caught in traffic on the way home from work and were feeling rather stressed out about having to get ready in 8 nanoseconds before plunging right back into traffic to get to the party. So instead we took our time getting dolled out and went out, just the three of us. It was a really nice night!

I wore THIS DRESS from casual plus in a 3X, with my ancient tipped Target heels I thrifted. My roomskie wore a really pretty metallic/lavendar strapless dress from Ross. 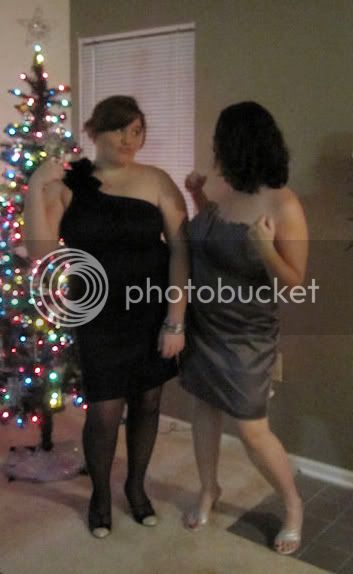 Bonus shot of me and the boyfriend being awkward kids. xD

Email ThisBlogThis!Share to TwitterShare to FacebookShare to Pinterest
Posted by Lauren B at 9:30 PM